Despite gloomy prognoses, there is room for optimism in 2017, especially as I’ve discovered an awesome new approach to making resolutions. This innovation effectively protects the resolver from the root-canal effect of good behavior.

My secret? I make only resolutions I can keep. Simple. Profound.

Why Albert Einstein or some other genius with funny hair hasn’t discovered this goof-proof method before, I can’t imagine.

Mission accomplished. I’ve made my list of resolutions, with no negatives to cloud 2017.

Come to think of it, my funny hair rivals Einstein’s, anytime.

How about you? What will be the first goof-proof resolution on your list?

OMG, thank You that You are Immanuel, God with us, on December 26!

Have you heard the biblical Christmas story a gazillion times? Me, too. Yet I’m always amazed how God arranged His Son’s Nativity.

We often miss one important aspect of His divine plan: God made sure Jesus had a stepfather.

Joseph, a construction worker, probably was putting the final touches on their first home when Mary gave him news nobody could fix.

Pregnant? By the Holy Spirit? Even Joseph’s bridezilla cousin Sapphira never conceived a tale like this. Devastated, Joseph decided to call off the wedding.

Until an angel told him Mary’s story was true.

How would his construction buddies regard this double-angel story? Joseph’s family, already humiliated, might not show for the wedding. Still, Joseph obeyed the angel and assumed responsibility for Mary and her child.

As if all this weren’t enough, the government raised taxes. Joseph had to register in his hometown, Bethlehem, several days’ journey away. Not the honeymoon Joseph had dreamed of. Riding a donkey her last month of pregnancy probably wasn’t Mary’s idea of fun, either. Parking and accommodations were difficult to find. Correction: impossible. Joseph’s relatives, still upset, apparently did not offer even a sleeping bag on the floor.

As Mary struggled through labor, surrounded by smelly animals, Joseph may have wondered if his angel dream had resulted from too much pizza. But he remained at Mary’s side. And when the Baby was born, he called Him Jesus. 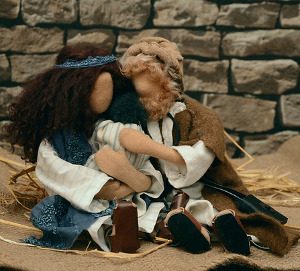 Fatherhood was harder than Joseph had anticipated. How could the Creator of night and day get them so mixed up?

When Joseph heard from angels again, it was bad news. King Herod wanted to kill the Baby, so Joseph sneaked his family out of town in the middle of the night. When had Joseph’s life turned into a Bourne Trilogy?

Even when they returned to Nazareth after Herod’s death, some still calculated their wedding date and Jesus’ birthday on their fingers.

While angels were talking to Joseph, he could play super-hero. But the angels stopped talking, and Joseph found himself playing male role model to the Son of God.

Like stepparents today, Joseph fades into the background. We hear nothing about him after Jesus’ junior-high escapade of disappearing — into the temple, it turned out — for three days. Playing second halo was tough then, as now. But the lives of Jesus and thousands of other children with blessed stepparents will never be the same.

Joseph’s first Christmas was complicated, with a capital C. So are the Christmases of all caring stepparents.

But then, love usually is.

Are you a stepparent who often plays second halo? If not, do you know someone who does?

O my God, thank You for my wise, cerebral husband who serves in so many ways. But OMG, thank You, too, for the boy who just couldn’t wait until Christmas!

Once calendars change to December 1, airport authorities turn their attention from averting terrorists to halting the escape of Christmas program directors. Many seek asylum in remote jungles. The most desperate sign up for space shuttle flights.

Why this seasonal exodus? Until Advent, optimistic directors delude themselves that Christmas program rehearsals are going well. Yet choirs have forgotten their music every week. Sixth-grade clarinet players blow the wrong end.

With a turn of the calendar page to December, however, …

Experts say victims of this psychosis, like Grandma, were obviously run over by reindeer. Which explains why anyone would become a Christmas program director in the first place.

The real drama begins when soloists and speaking roles are chosen.  Most Nativity plays include only one Mary, and 49 hopeful candidates — backed by 49 equally hopeful mothers — eye the role. Choosing an Infant Jesus from the cute babies in a nursery is a task no Middle East negotiator should tackle.

Amidst controversy, enter the Advent flu. …

It never picks off a candy cane who speaks one line. No. This deadly illness wipes out leads and entire tenor sections. The Annunciation loses something when a nauseous-looking Gabriel delivers his lines holding a barf bag.

Standing defenseless before hacking, germy choirs, instrumentalists and casts, the courageous director battles a shower of viruses unmatched anywhere in the universe.

But by law, directors are not permitted to die during Advent. So, gulping remedies and popping pills, they face weeks of practices. It is said there are no atheists in foxholes. This also holds true during Christmas program dress rehearsals.

… and the cast stuns the director with an incredible performance. They were actually listening when she begged them to warm up horns, annunciate words and not pick their noses.

To be sure, no production escapes imperfection. The angels suffer from static cling. Joseph still doesn’t know how to sit while wearing a dress. And as Wise Men and Shepherds adore the Baby, a borrowed donkey leaves offerings on the hay-strewn floor.

But flawed performances only remind leaders that the original event took place with no rehearsals, except in the Mind of God. And as weary directors everywhere breathe a deep sigh of relief and shelve Christmas music until next August, no one needs to tell them Christmas miracles still happen today. 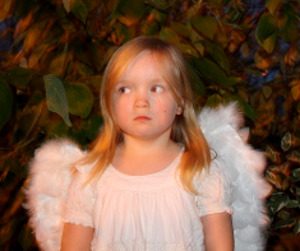 Have you ever led or participated in a Christmas program? What moment would you most like to forget?

O my God, I really like pumpkins. But what’s that You’re saying? OMG, You’re right. (Note to self: When God has to tell you it’s time to take the pumpkin off the front porch, it’s time.)

Are you ready to sing Christmas songs?

I am! Though each Advent, I’m reminded some Christmas songs are just plain … odd. 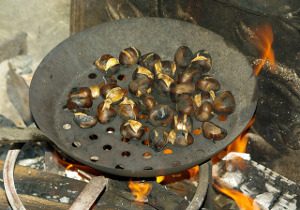 Let’s examine the first line of a song crooned by everyone from Nat King Cole to Justin Bieber: “Chestnuts roasting on an open fire. …”

Have you tasted a chestnut? Ever?

I sampled my first when someone at Taylor University, concerned that thousands of good, Christian people were singing lies every Advent, roasted chestnuts over an open fire after a Christmas event.

The immortal Erma Bombeck suggested we sing about popcorn in the microwave instead.

If a guy in Frozen Nose, Minnesota, had heard that original version, he might not have helped make that song a best seller. A more likely reaction as he shoveled snow off his roof: “You want a white Christmas, buddy? Turn around, and my boot will send you on a free trip to Santa!”

Who hasn’t warbled, “Oh, bring us some figgy pudding”?

Do you hear a “please”? The mom in me bristles. How rude.

Worse yet, “We won’t go until we get some,” sounds like holiday extortion.

Most carolers would run away screaming. 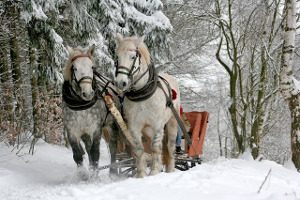 We sing about reckless driving. Given the second verse of “Jingle Bells,” Miss Fannie Bright’s parents probably had something to say about her date’s driving the nineteenth-century equivalent of an unsafe jalopy. And the unrepentant driver urges other guys to pick up girls and whip fast horses into winning.

Consider “The Little Drummer Boy,” in which he offers the only gift he possesses to the Christ Child. Lovely.

What mother of a sleeping newborn wouldn’t welcome a kid banging on a drum?

Mary probably would have preferred a “Silent Night,” though most births are anything but. Ditto for babies. Jesus was a newborn who needed feeding, changing and cuddling.

Did He say, “Excuse me, Mom, but I would like a snack”? Perhaps, “I need clean swaddling cloths.” And, “Please lose the cold hands.”

The Bible doesn’t say. It does say that thirty-plus years later, Jesus cried when His friend Lazarus died.

Yet we sing, “The little Lord Jesus, no crying He makes.”

Hmm. Sounds a little odd to me.

Do any Christmas songs strike you as a bit strange?

O my God, Nanook of the North, a.k.a, my husband, wore a parka and gloves as we walked outside. Too smart to comment, he nevertheless eyed my bare hands and head. But, OMG, when Your big hands toss the first snow like confetti, I want to sense and celebrate every flake.