Hubby and I labeled our new home’s difficulties as “temporary.”

The Merriam-Webster Dictionary defines that word as “lasting for a limited time.” As in, “This sparkly 1970s wallpaper is temporary.” Or, “This white carpet where kids held pop-spitting parties is temporary.”

We should have known better, having delayed remodeling our former house until we’d lived there 23 years. Then spent big bucks making it irresistible … so we could sell it.

Now, 11 years later, “temporary” has caught up with us again.

Which illustrates two reasons we procrastinate in updating our home:

This complicates the simplest project, yet we’ve made progress. After only 45 years of marriage, we not only like our terra cotta/orange door, we arrange decorative pillows on our bed without debate. Hubby keeps the plain one on his side. The fancy one goes on mine.

Surely, we can now agree whether to paint kitchen cabinets Blue Sand or Eggshell Ecstasy.

Hubby’s eyes narrow. “Have you ever seen blue sand? Anywhere?”

I haven’t experienced ecstasy boiling eggs, either. However, I don’t want to extend a discussion about color misrepresentation to blank-check proportions. Then the cabinets will go unpainted another decade.

But a decade is temporary. Not forever.

Hubby, a reasonably skilled handyman, could shorten makeover timespans if he were married to a better assistant.

We attempted wallpapering together. Once.

Everything I touched turned to trapezoids.

I should create one for homeowners like myself. I would condense “Seven Simple Steps to Your House’s Total Makeover” to “Two Simple Steps”:

But then, I’d have to move again, probably to jail. Even wallpapering with Hubby seems preferable. Though he might feel differently …

I suggest another option, in which we could forego painting the kitchen and cabinets and installing new counters and —

Surely, I say, if we paint the kitchen, we should replace ancient, discolored counters. The flooring’s nicked, too.

“If remodeling seems overwhelming,” I say brightly, “we can move to a different house.”

After we sink a ton of money and work into our present home to sell it.

Before moving to another house with temporary sparkly wallpaper. Temporary stained kitchen counters. And temporary carpet somebody showered with Blue Sand …

Your Extraordinary Ordinary: Are you at home with the temporary?

OMG, sometimes gray Monday fades into gray Tuesday and Wednesday, which seem to fade into gray forever. Lord, did You go to Florida for the winter, too?

Then, ta-da! With one giant, neon-hued brushstroke, You paint Your love across the sky. 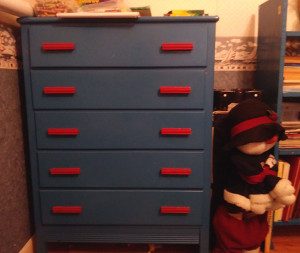 How did the dresser start out in life? I don’t know, but its size and plain, sturdy lines said, “I belong to a kid.”

The dresser’s original kid probably wadded clothes Mom had folded and stuffed them into its drawers. Perhaps he yanked out drawers, climbed the “stairs” and jumped off the top with an umbrella parachute.

Years later, I discovered that dresser in a secondhand store, marked half-price. It would do until my three-year-old son started school. However, it wore a woebegone, cast-off aura. 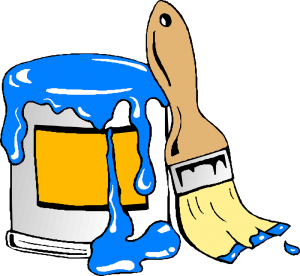 As a teen, I’d rolled my eyes when Mom painted end tables orange and a bedroom suite blue. Who did that?

Well … I did. After a critical paint chip comparison, I began painting the chest eye-popping blue. I planned to paint its handles equally vivid red.

Then my young husband needed an emergency appendectomy. While Hubby slowly recovered from complications, I slowly finished the dresser. Late at night, I added a second coat, a third, maybe more — I don’t remember. I experienced a glad moment when I hauled the completed dresser upstairs to my son’s bedroom. An even happier one when I brought his daddy home. 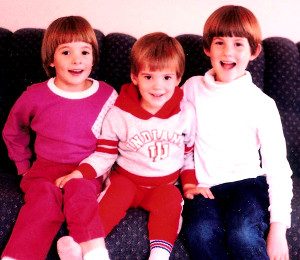 David, flanked by his older sisters, was a toddler when I painted the dresser a vivid blue.

Both had jobs to do. Daddy returned to work. The dresser once more endured yanks, shoves and a “helpful” kid who stuffed clothes Mom had folded into its drawers. (He also attempted to climb to the dresser top, but I stopped him on the second step.)

A doggie bank constructed from a Pringles can resided on it, along with half-consumed PB&J sandwiches and piles of baseball cards. With ABC curtains, Mickey Mouse sheets, and a carpet perpetually layered with toys, the dresser helped make the room my kid’s haven.

But adolescence sneaked in. The first clouds of Eau de Gym Shoe settled over his room and, with them, a dark cloud of protest: Mickey Mouse sheets? Seriously? Did he really need ABCs displayed on his curtains? 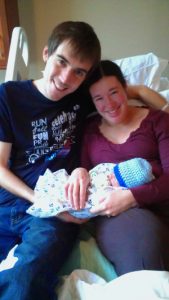 David with his wife and their first baby.

I changed his décor to manly navy blue. Strangely, he didn’t ask me to lose the dresser.

Perhaps, even he realized he didn’t need a bigger one. Why, when his wardrobe resided in heaps on the floor?

One day, he departed for college, then marriage. The cheerful blue dresser, deprived of its kid, looked a little sad.

Now, though, it proudly houses coloring books, finger paints, and Play-Doh for grandchildren.

That dresser was made for kids.

And this old kid still loves it.

Your Extraordinary Ordinary: What furniture in your home tells your family’s story?